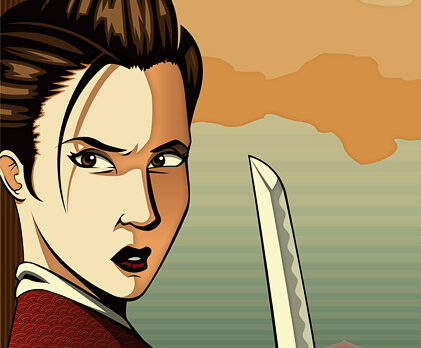 Doing these digital pieces has gotten me out of my comfort zone somewhat, and in this image I tried some new things. There’s a more focused narrative aspect going on here than usual in my stuff (don’t ask me what though, is mystery!). I studied some Japanese ukiyo-e prints for inspiration, and while my image bears little superficial resemblance, it was instructive in an overall philosophical artistic approach, and specifically when it came to things like rendering the background.

Indeed, the background is what I labored over the most, mainly in the choice and application of colors and textures. I was aided by a tool in Illustrator that allows you to quickly and easily shift the color palette to experiment with different choices and options. Even with that assisting me, it was a long and laborious trial-and-error process of coloring that area.

In experimenting with these digital drawings, I’ve come to embrace the flatness of imagery and its graphic possibilities. Aspects like the gradation of lines in the sky or the overlaid pattern on the woman’s garb are things I probably wouldn’t have considered in the usual way I do things. They may seem like small and barely significant details, but small explorations can lead to much greater ones down the road.