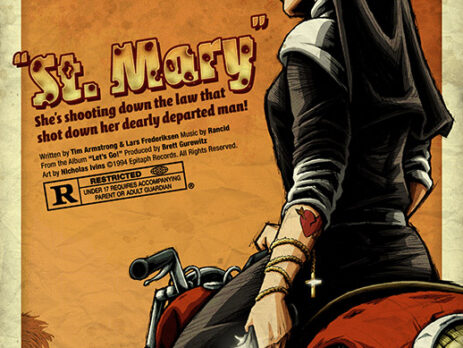 Rancid’s 1994 album Let’s Go! wasn’t their first, but it was the start of their steady rise to fame in the 90’s. It is a quintessentially Rancid album that displays many of their trademarks—a surprisingly large collection (23 tracks total) of short and fast melodies (not a single track reaches the 3:00 mark) centered around their local community, the denizens that inhabit it, and a sentimentally wistful attitude towards.

To be perfectly honest, I consider it one of their weaker albums. Many of the qualities that make them my favorite group can be seen here as seeds that would eventually blossom on subsequent releases. None of the songs are bad and some of them are pretty good, but there is a breezy, almost inessential quality to many of the songs. There’s nothing wrong with that and the album is pretty fun to listen to, but I prefer the heaviness Rancid’s music would soon inhabit after Let’s Go!, in both lyrical content and musical effort.

That being said, some of the tracks are evocative and inspiring, in particular “St. Mary.” As someone who formed strong ties with my childhood friends and have maintained them into adulthood, I appreciate Rancid’s overall theme of celebrating the deep and everlasting friendships we forge with those around us, and the intense loyalty that binds them. Let’s Go! at times seems like an album of urban folklore as the songs center around individuals and their trials and tribulations. There is a textured, lived-in tone to these communally-themed songs, and the band excels at quickly and effectively painting portraits of these peoples’ lives.

“St. Mary” is a brief but memorable story about a woman on the run for “Shooting down the law that shot down her dear departed man.” The details are sparse, but the implied narrative is a compelling one. Of course, I would never condone the brazen killing of anyone (law enforcement or otherwise), but there is a romance and tragedy to the situation, like an angrier and more dangerous Thelma & Louise. The out-of-control woman is a trope that is as old as fiction itself, and its underlying male-centric hysteria is somewhat amusing in its fear of a female unconcerned with the patriarchy’s pathetic need for dominance.

The story also touches upon the tense relations between law enforcement and disadvantaged groups in urban areas. Rancid is an all-white band hailing from the East San Francisco Bay, but they do come from a lower economic class, and there is no end of ways that our society is committed to fucking over poor people. I doubt St. Mary’s man would have had any trouble with the law if he was an upper middle-class accountant in a BMW.

So, there are a lot of criss-crossing themes at play in the song, which again, is remarkable considering how brief it is. I had the idea of illustrating St. Mary as an actual (ex) nun, as befits her name. Although the lyrics mention her catching a bus to skip town, I loved the idea of a gun-toting nun roaming the urban countryside on a motorcycle (there is another track on Let’s Go! titled “Motorcycle Ride”). Without giving myself too much credit, I think that image is as intriguing and mysterious as the song itself and works nicely. I enjoyed adding the badass details to the nun, including her leather boots, torn stockings, tattoo, and strands of hair peeking out.

My other bright idea was making the image into a B-movie poster in the style of trashy 70’s cinema, which seemed perfect considering the themes of criminal behavior and “crazy” women. I mean, “She’s shooting down the law that shot down her dear departed man!” is as perfect a teaser-tagline as you can possibly come up with. Paired with a badass nun with a gun? I’d totally see that movie at the grindhouse.

The angling and perspective were a little difficult (I’m not experienced at drawing motorcycles, especially from weird angles), and I could have done a better job, but I think it works as a compelling image. The sketchiness of the inking was fun (not to mention fast!) and grunging up the image and color gave it the right tone.

Despite the rolling punchiness of the song, there is a potent sense of pathos delivered in the song’s bridge—”Shrouded in anger encompassed by pain / He was your best friend and you will never ever ever see him again.” With just a single line St. Mary’s pain and loss is summarized perfectly. It doesn’t excuse her perhaps indiscriminate killing of the law, but we can all imagine the wrath we’d feel at the wrongful death of the love of our life. Hell hath no fury like a nun bereft of forgiveness.