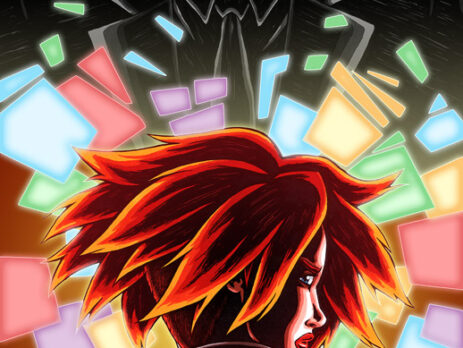 I really, really enjoyed UK artist La Roux’s self-titled debut album (’09) and “Tigerlily” quickly became one of my favorite songs, period. It’s 80’s-style synth-pop stylings and crashing beats are instantly captivating, and anything that harkens to Michael Jackson’s “Thriller” is a-OK in my book. The vocals and lyrics are also very effective, contributing to a very evocative song.

Fun fact: I had no idea what Ms. Roux looked like when I conceived of this red-headed protagonist.Â  So it was indeed an eerie surprise when I first glimpsed her visage on the album cover. The synth beats really brought to mind an array of blinking, pulsating color, visualized as squared colored panes. The creepy vocal interlude at the song’s bridge evoked the image of a dark antagonist, drained of color, humanity, and mercy.

The process of this piece was one of the most laborious and difficult of anything I’ve ever completed. It spans several years of ruminating, failed attempts, delays, and more ruminations before finally being completed. The composition – something I typically agonize over – eventually came together pretty well after many sketches and ideas. The project kept getting pushed aside as more urgent matters continually sprang up, until I summoned the constitution to finish ‘er off.

I’m pleased that the result so perfectly captures my vision, although if it had taken about 18 months less time, I would be more pleased! Such is the nature of art.