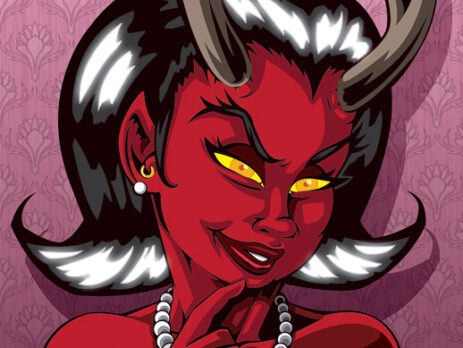 Another entry in my music-inspired “Artistic Audities” series, this is an illustration of the title track off Portugal. The Man’s latest album. The indie rock band, despite its bafflingly obtuse name has quickly become one of my favorite groups in the past few years. Evil Friends is arguably their strongest, most cohesive album to date and contains an above average sampling of their best qualities – jumpy rock riffs and deeply emotional, swaying rhythms. The song in question is an example of both, starting off slow and echoingly melodic, before undergoing a throbbing transition into more upbeat, jaunty section that persists throughout.

I imagined a 1950’s suburban character and setting (I have a thing for that), but bizarrely twisted and mischievously impish (that too). The song makes several references to a/the devil, so I think that subconsciously informed my concept (it also ties in with the title of the album and its… interesting artwork). I honestly didn’t consciously notice the devil references in the lyrics until after I had formed a complete picture of this piece in my head. I think that gets to the heart of why this music series interests me so much – the emotive power of music and how evocative it is to our minds on a level that is often just below our normal cognitive awareness. My brain has always had a tendency to create visuals, narratives, and characters when I listen to music. It’s not a purposeful act; but rather something that occurs organically (with the right song, of course).

The similarities to the artwork of Coop are unintentional (and unavoidable, I suppose). I’ve always been an admirer of his stuff, although if I had to do this over I’d probably make it less similar to his distinctive devil women (she’s fully clothed, so bonus points for not being 100% plagiarized). The song’s tempo and attitude is energetically brash, so I wanted a character and demeanor to match that. Likewise, the colors are equally bright and punchy. I almost went with a blue for the wallpaper; it looked good, but the overall color scheme was a little too primary.

I kind of want to illustrate the songs of the rest of the album—if not all, then at least my favorites. There’s a thematic cohesiveness to Evil Friends that lends itself to such an undertaking, and I sort of have a half-baked concept in mind for the rest. So look out for that! Or… not.

I can get so wound up
But I feel alright
And if I get some rest
Yeah that’d be nice
When I shouldn’t do it, I still do it
What you think’s got nothing to do with this
Before you were born, I was already sinning

Yeah, yeah yeah
When I get too worked up
Well I work it out
And if I get too down,
I just shout it out
I bet I have it all, but the rest will do
And it’s nothing against all I do with you

Before you were born, I was already sinning

Its not because the light here is brighter
And its not that I’m evil, I just don’t like to pretend
That I could ever be your friend

If you don’t listen so good
I can hum it out
Na na na na na na na na
I know I shouldn’t do it
I just do it
And what ya think’s got nothing to do with it
Before you were born, I was already sinning

Music and lyrics © Portugal. The Man.