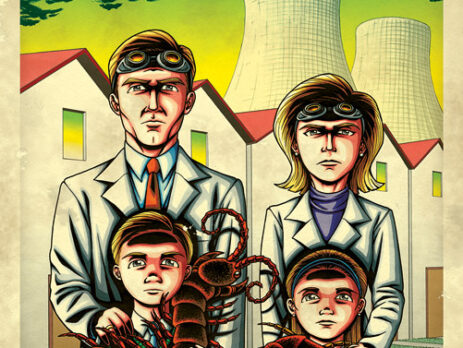 “Forever Growing Centipedes” is a song by The Faint, from their 2008 album “Fasciinatiion.” I found it a bit weaker and more uneven than their previous efforts, although it still contained a lot of interesting things, like this.

The album seemed a bit more experimental in terms of both musical style and lyrical content, for better and worse. “Centipedes” is one of the better songs on it, powered by their characteristic electronic beats and gnashing guitar riffs, overlaid with bizarre and otherworldly lyrics. It is basically a loving ode, with the song’s protagonist describing the life he has laid out to his significant other – living together in an isolated house in the forest, while studying science in order to unlock the secrets of immortality. Aaaand eating mushrooms and growing centipedes. It’s actually kind of sweet in a really twisted way (“Forever growing centipedes, you and I”).

I randomly imagined a family portrait and composition similar to what is shown here. Like the song, it has a kernel of normalcy buried in a weirdly grotesque setting and viewpoint. Despite the appropriately ominous, potential visual possibilities of the song’s forest setting, I opted instead for a banal and rigid tract housing neighborhood. From there I built up a 1950’s suburban setting, complete with some looming nuclear cooling towers of the atomic age. I wanted to contrast the strange and freakish subject matter with a familiar, ordinary setting to create a sort of tonally discordant bland horror feel (which I think draws a parallel to The Faint’s musical stylings, especially in this song).

The aspect of the piece I enjoyed the most was the sky. The green color supports the unbalanced mood, and the black, brushy clouds create an overwhelming darkness that is both literal and figurative. And the cooling towers, which aren’t usually at the top of the list of things you want your house to be next to.

Several people have pointed out the similarity to the classic “American Gothic” painting by Grant Wood. I can see the conceptual resemblance, although I did not have that painting in mind when I did this. Or maybe I did subconsciously, since it’s one of the most famous (and parodied) works of art of all time. But in mine the man is on the left, so… totally different.

I could step outside
And walk in any direction
Everything I choose
Erases ghosts that arenâ€™t natural
But it makes some new ghost
That I can feel
I can just choose one as far as I can tell
If I feel off course
Iâ€™ll learn to kick of the habit
If I spin off track, I know that I can change
We can both grow up, to be 150
But for now we have children together.

Music and lyrics Â© The Faint.