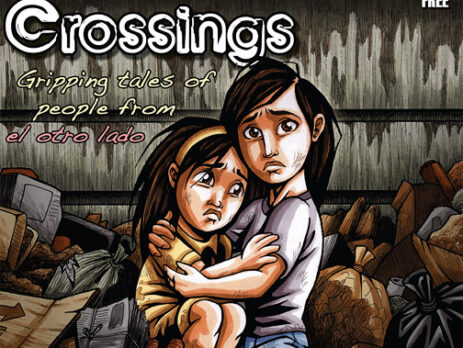 This was a cover for the Inland Empire Weekly regarding Mexican immigrantsâ€™ tales of crossing the border. My ideas were drawn from the text of the article itself, which contained a number of firsthand accounts from Mexicans of different walks of life. The one that struck me the most was of a girl who (illegally) crossed the border with her father and younger sister. Not long after crossing, their father quickly hid the two girls in dumpster so as to not to run afoul of a law enforcement agent. The idea as depicted here immediately popped into my head, and fortunately the editor decided to go with it.

Although the story had no editorial or political slant to it, my illustration could probably be interpreted as sympathetic. At the very least I was sympathetic towards the girl telling the story (as well as her sister), and could imagine what they must have felt in their situation â€“ sitting in garbage in an alien country, their father momentarily gone, trying to keep quiet so as not to alert the nearby border patrol officer. Regardless of the legality of their situation, I found it the most interesting of all the stories, and this moment in particular highlights the intense desire many Mexicans have of living in America and the lengths they will go to.

I think the image turned out wonderfully and perfectly captured the vision I initially had. I have detailed the process of it in the Processes section.