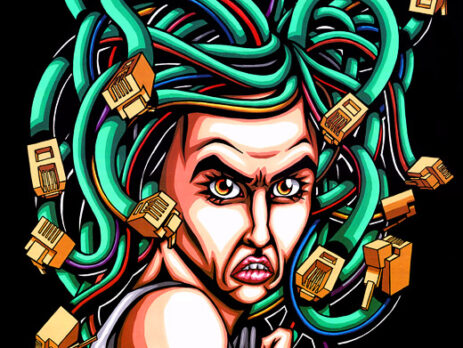 An image done to build up my portfolio, I made at least two unsuccessful attempts to make it reality. What made this final execution successful was the pose of the medusa as well as the large size of the drawing. With both of those established it all fell into place easily.

Her face was an issue I contemplated – should I do a beautiful woman or an ugly one? I decided on an ugly one, since the medusa is a monster and because I imagined the picture illustrating a problem or issue relating to phones, internet, communication technology, etc. If she was beautiful, happy, and smiling I think it would have been a less interesting image and had less impact. Besides, I draw enough pretty girls as it is.