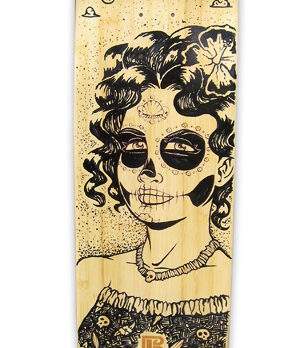 This was a skateboard deckÂ  design I did at an event at Zories Flip Flops & Beachwear in Carlsbad (who donated the board). I had never done anything like this before, and was pleasantly surprised that my pencils and Sharpies were able to work on the board’s surface. I improvised the design and completed it within a few hours, also things I don’t usually do! My idea was sort of a beach-inspired Pacific Islander Day of the Dead theme, which you shouldn’t try to think too hard about.

This deck will eventually be auctioned off for charity. Details coming later.