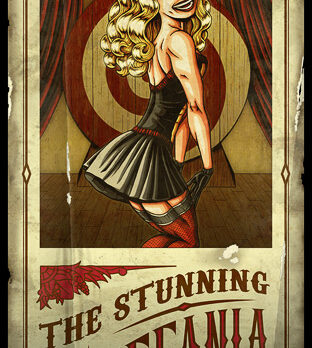 I decided to do one-shot posters of all the girls from my “If This Hat is Missing…” piece. It started with justÂ  a simple drawing of “Mirela,” which grew to drawings of all of them, and then backgrounds, and then fully-realized poster designs (with hand-drawn type) that were artificially aged inÂ  Photoshop. There were clearly a lot of steps to the project, and a tremendous amount of work in each (times four), but I think all the effort shows through.

One of my intentions was to give the girls as much personality as possible; one thing I focused on was giving each of them a unique smile. All of them (as well as the knife thrower) are characters in a comic book series that I am planning to do at some point in the future. It features a traveling Eastern European circus in America at some point in the early 20th century;Â  all the girls’ names are of Romanian and Hungarian origin. Stay tuned…!

Read all about the process here!