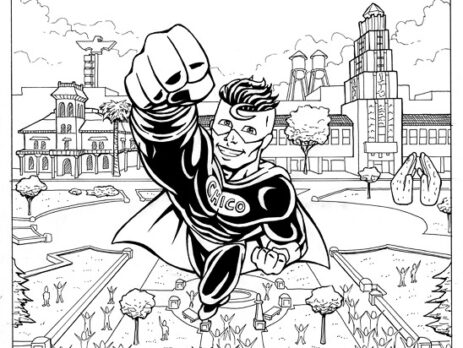 1. These are my initial (very rough) ideas for the cover. The art director wanted a superhero-themed cover/issue, which played to my strengths as an Ã¼ber-nerd. Number five is what would make the final cut, but I was asked to flesh out four, five, and six.

2. The finalists in more detail. Number three was a better idea in theory than in execution, in my opinion. Number two showed the city of Chico itself, so it was the strongest one.

3. I was asked to put several landmarks from Chico into the city background, which I roughed out here.

4. This is the beginning of the final with all the elements sketched in.

6. Final colored version. I was asked to leave room up top for layout purposes.