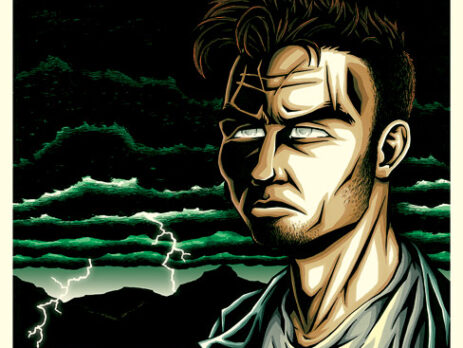 “High Plains Drifter” is a Beastie Boys song from their 1989 album “Paul’s Botique.” Its name is drawn fromÂ Clint Eastwood’s 1973 western film. Besides the title, the song does not borrow much from the movie, other than a general notion of a single person roaming around causing mischief and ruckus. It’s a very strange and somewhat haunting song (even within the context of the Beastie Boy’s oeuvre), with their layered vocals blaring in turns over a jumbled, shambling beat that samples from a number of different other songs.

In crafting an image to illustrate the song, I drew from thematic elements of both of the song’s namesakes. In the film, there is an implication that Eastwood’s titular character is some sort of living embodiment of revenge, perhaps to attain retribution on the cowardice of a western town’s inhabitants. In any event, he’s also a huge, gruff asshole who kills and rapes anyone who crosses or threatens him.

Likewise, the song has an implied supernatural aspect in its first verse: “Pulled over to the river to take a rest / Pulled out a pair of pliers and pulled the bullet out of my chest.” I imagined an undead drifter as the song’s protagonist, picking himself up after being murdered and proceeding to make his way across a desolate desert landscape, stealing and pillaging along the way. There isn’t so much an implied lust for revenge as in the film’s case, but rather a more disaffected unwillingness to conform to society’s laws any longer. In that vein, I depicted him as a punk-ish type individual. Rules are for the living, man.

Knucklehead deli tried to gyp me on the price
So I clocked him off the turban with the bag of ice
Cause I’m mellow like Jell-O cool like lemonade
I made my getaway and I thought that I had it made
I feel like Steve McQueen a former movie star
Look in my rearview mirror seen a police car
Ballantine quarts with the puzzle on the cap
I couldn’t help but notice I was caught in a speed trap
Dirty Mary Crazy Larry on the run from Dirty Harry
Stash the cash in the dash but my gun I did carry
I’m seeing blue and red flashing deep in the night
I got my alibi straight and I pulled over to the right
Cop knocked on my window and said Boy where’s the fire
you’ve got a mailbox on your bumper and a bald front tire
Outta the car longhair your goose is cooked
Read me my rights fingerprinted and booked
Makin’ like a D.T. driving a Gran Fury
Wherever I hang my hat’s my home and my past is kind of blurry
Every dog will have its day and mine will be in front of a jury
I’m the High Plains Drifter and I’m never in a hurry

Read me my rights as if I didn’t know this
Threw me in the tank with the drunk called Otis
With his five o’ clock shadow he smelled of 3-day old beer
My man turned to me and said why are you here?
I said I’m charming and dashing I’m rental car bashing
Phony paper passing at Nix Check Cashing
I went before the judge he sent me to the Brooklyn House of D.
He said you behave son or we’ll throw away the key
Harry Houdini’d out the cuffs I kicked the screw in the knee
Took the bailiff’s wallet and went straight to O.T.B.
I had a good feeling easy come easy go
I bet on one horse to win and another to show
And sure enough that knak came in
Brought my ticket to the window and collected my win
Broke into my new car with a wire coat hanger
Hot wired hot wheeled and Suzy is a headbanger