“If This Hat is Missing I Have Gone Hunting” 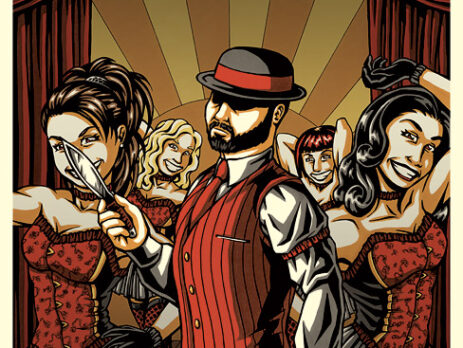 I draw a lot of inspiration from music. It would take an (extremely boring) essay to explain why, but to summarize, there’s something incredibly rousing and creatively invigorating about music. It inspires images and stories, and in some cases I have tried to illustrate these conjurings the music has stirred. In this instance the song is by German band Get Well Soon.

I used a fairly limited color palette in this image; I was interested in a simpler, flatter application of color. I had been looking at some of Shepherd Fairey artwork and wanted to capture a similar graphic cut-out/print look. I didn’t go far enough in that regard to approach the look of his work, but I was very happy with how it turned out.

In searching YouTube for an audio clip of the song to post, I was surprised to find that a music video exists for the song. I was a bit amazed/dismayed at some of the surface-level similarities to my image (old timey-ness, cute girls, vests!). But I think they’re substantially different in concept and tone.

I try to avoid songs that have videos already, so a) I won’t be influenced by someone else’s artistic vision and b) I choose a song that is not necessarily popular, so there will be less of a cultural context for most people and they might consider my vision more neutrally.