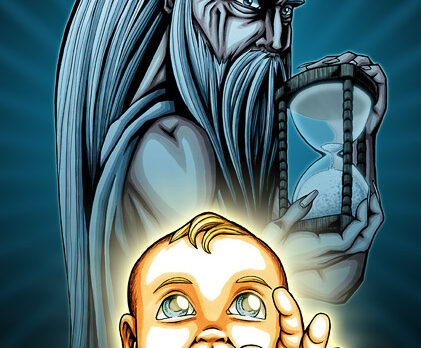 To promote myself at the beginning of 2008, I sent out New Yearâ€™s cards to my mailing list of clients with this image on the front.

One of the concepts Iâ€™m most interested in are iconic images that span time and place, that speak to entire groups of people â€“ cultures, societies, etc. Whatâ€™s really cool about these kinds of icons and motifs is that every artist has their own unique take on the concept. IÂ  love it when multiple artists will render the same subject but in their own style and from their own viewpoint.

The most successful illustrations (or any creative act) have two vital components in regards to originality â€“ concept and execution. For an illustration to be greatly compelling, at least one of these things has to embody innovation (if not both!). A concept or subject that has been done countless times over can seem fresh and interesting if it is done in a way that hasnâ€™t been seen before. Conversely, a truly new idea has an inherent appeal that might even be enhanced through traditional execution. And an image that is completely original in both aspects can have a great amount of interest.

In this case, I chose to draw from a cultural image that has persisted for some time now â€“ Father Time and the New Year Baby. In this case the concept isnâ€™t original at all, but my depiction is (I hope, anyway!).

Duality is also a fun concept to explore, which I did here in a few ways â€“ color, line, size, placement, etc. In this case the man and baby (who are the same person) are in different stages of life â€“ at two ends of a spectrum. The aforementioned visual devices are meant to symbolize the difference that separates them and further suggest the theme of this cultural symbol â€“ the passage of time, the cycles of life and death, and the duality of the old and the new.