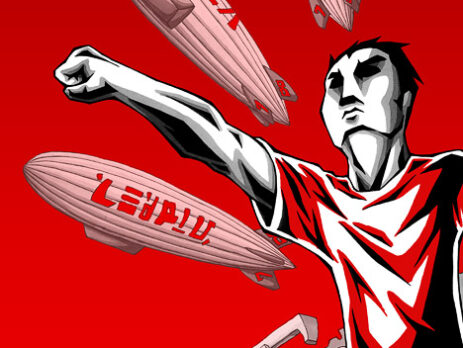 A cover image for 78 Magazine, done back when I was merely a staff illustrator. The theme of the issue was “Question Authority,” and I came up with a number of sketches that explored that concept. This one was everyone’s favorite, and we even put up extra money so that we could have the color red for printing (it was a black and white publication).

Like most every other hip artist on the planet, I’ve always been attracted to Soviet constructivism/propaganda imagery, and used this assignment to explore it for both my enjoyment and the magazine’s benefit. I like the details of the picture, from the foreign-looking written language I created to the industrial background. It screams “communist,” paying homage to those bizarre cold war images of days past, while still retaining a look of modernity and uniqueness that screams, “Ivins!” Or maybe I just scream that.

A lot of the power (and inspiration) of the image came from the experience of being a part of 78 Magazine. I was still in college and had just joined up with the magazine. At the time, the staff was still a large and diverse group of people from various walks of life and different social circles, all united by the goal of producing and independent publication aimed at college students. It was distributed to three colleges and had a readership of potential thousands, and it was all funded and distributed ourselves, totally separate from any of the schools.

Although at times grueling and frustrating, doing the magazine was one of the best experiences of my life, both as an artist and a person. The feeling of contributing to something larger than myself was exciting, and it was only augmented by the energy and enthusiasm of all the people I worked with. From it I received a lot of quick experience, personal and literal rewards, and met some really cool people and made some long-lasting friendships.

All that creative zest and personal enthusiasm went into this image, which is what makes it not only a cool and effective illustration, but also a snapshot of good times past and a nostalgic reminder of how awesome it was to be an underground hardcore badass.