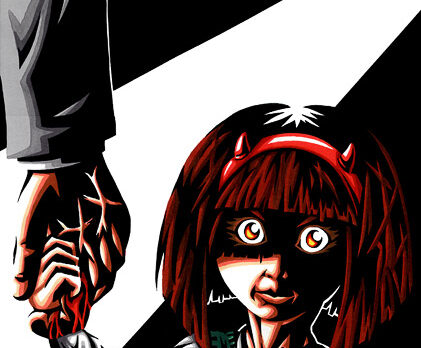 This is where it all started!

It was the first image that I did in my current style, done for the final assignment in an illustration class. The instructions were to illustrate our idea of the devil with any medium we wanted. We were to have no input from the teacher on it, the assignment being a test of our instincts and illustration skills.

Immediately I knew I wanted to avoid the stereotypical red guy with horns concept, so I tried to come up with more unexpected ideas. A little girl (a Catholic one, no less) seemed like the exact opposite of the classic image of the devil, and exemplified my belief that the worst, most insidious kind of evil is that which you don’t expect. After going through several sketches exploring the composition of the picture as well as the appearance of the girl – none of which I was truly satisfied with – I just decided to start drawing it and see what would happen.

After all the agonizing painting I had to do in this class I was pretty excited to finally get back to what I do best – drawing and being weird! I think that enthusiasm, and consequently, the extra effort I put into it showed through; this is by far my best project from this class. As I was doing it, part of me was worried that my concept was a little predictable – I figured that some of my other classmates would end up taking the “opposite” approach to the devil, and mine would end up looking unoriginal despite my originality… boy was I wrong! Nearly every other person used the horned, red-skinned devil concept, which I found disappointing. Which isn’t to say that some of them weren’t pretty good, but they still struck me as pretty obvious. The teacher would from time to time stress that the best kind of illustration is that which makes the viewer stop and think, an image that has a certain implied narrative aspect to it. That’s what I tried to evoke with this picture, and I think I was successful. My two favorite aspects of the picture are probably the girl’s necklace and her headband; I knew I had to somehow work horns onto her head, and I tried to imply it with the shape of her hair but it wouldn’t work. The headband seemed both over-the-top and at the same time subtle enough to work, so I couldn’t resist putting it up there.

I really enjoyed drawing this way and it quickly became my “style.” It’s not only a visual look, but it also represents an outlook and perspective that I think is unique and special. It’s very dark and to this day I’m surprised at the level to which it is. Its horrific tone and dark visual look were things that seemed to materialize out of nowhere, but which felt really right somehow. I just opened up and that’s what came out!