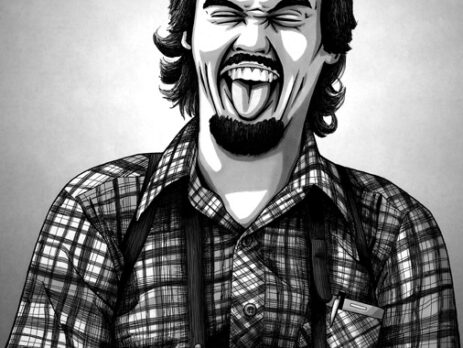 The Union Tribune, probably the largest newspaper in San Diego, ran a contest for Father’s Day ’11 to do a portrait of your father.Â  The UT was also where both my parents worked (and met). My father Bob Ivins was a photographer there for many years before passing away in 1991. My mom urged me to do the contest, and instead of arguing with her (Standard Operating Procedure), I decided to give it a go. There was a prize involved (which I didn’t win – spoiler alert), but I wasn’t so much interested in it. My mom provided me with a folder of photographs she had of him, from which to choose a photo to base my drawing on.

Looking at the photos, I was reminded of the striking similarities between my and my father – both physically and personally. I have him to thank for my inability to take a serious picture, among other things. He was quite a wacky guy, but also a nice and generous man who was well-liked by most that came into contact with him. The photo I chose seemed to capture almost everything he was in a single shot, including his trademark plaid shirt and even more trademark attitude.

Once I was finished with the piece, I uploaded it to the newspaper’s submission site. Almost immediately I received emails from former co-workers of his who were still working at the Union Tribune, brimming with nothing but the nicest things to say about him. They all had fond memories of him and praised my portrait. It was heartwarming, to say the least, and a reminder of what an exceedingly decent man he was and how much of an impression he left that can still be felt 20 years later. As much as I take after him, I don’t think I’m quite the man that he was, although I certainly try.

In my own way I attempt to carry on his legacy, through creativity and zaniness (and facial hair). This picture was another way of doing so, and despite the fact that I didn’t win the contest, I was glad that I did it. The praise and stories I heard from his friends and co-workers were much more valuable than some baseball tickets.