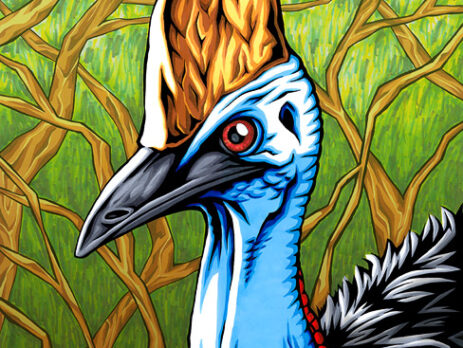 It had been a while since I had done a big bird picture, so I decided to finally get around to doing an image of a cassowary, something I had been meaning to do for some time. They’re certainly strikingly exotic creatures, so it was fun to illustrate their various weird attributes.

Indigenous to the rain forests of Papua New Guinea, cassowaries are the world’s third largest bird (behind the ostrich and emu), reaching 5-6 feet in height and weighing more than 150 lbs. They are also called the world’s deadliest bird because of their impressive size and razor sharp talons. Although shy and reclusive by nature, they could easily gut a man in a powerful leap if provoked. The bony protuberance at the top of their head is called a casque, the purpose of which is not entirely understood (perhaps for pushing their way through dense foliage in search of food). The bodies of these flightless birds are covered by an intriguing jet-black fine coat of hair-like feathers. The males incubate and raise the chicks.

“It’s pretty much my favorite animal.”