A continuation of the “Forever Growing Centipedes” family and a companion piece to  “Devoted Father…” (and possibly this guy – grandpa?), I wanted to flesh out the idea of that nuclear family.

The social aspect of the 1950’s-born Atomic Age is a fascinating concept to me. We’ve all seen the many ridiculous and laughably foolhardy predictions and materials of the time – from nuclear-powered cars and kitchens to the more darkly ludicrous duck and cover scenarios practiced by school children. As summarized by Wikipedia: “Nuclear policymaking became almost a collective technocratic fantasy, or at least was driven by fantasy.”

That hopelessly outdated-from-the-start optimism and forward-thinking gusto is the most captivating component of that bygone era, and inspires as much nostalgia as it does derision. Pure, unfettered inspiration and drive for the future is an overwhelmingly intoxicating sensation, especially when it takes hold on a national level. That tingling sensation of the time ahead being filled with seemingly endless possibilities and boundless opportunities is a rare, beautiful feeling. It’s like being awash in a surging sea of pure inspiration, carrying you forward into new and uncharted waters.

It can’t last though, of course. At some point – within minutes, hours, or days – the euphoria fades and the cold nature of reality sets in. Problems begin creeping in, issues and delays begin piling up, and eventually the enormity of the task ahead looms heavy and large. Thinking up things is easy and fun, but getting them done is a much slower and laborious slog. And often, the end result is failure, whether due to the inherent impossibility of what you were trying to do in the first place, or because of some unforeseen or insurmountable obstacle that arose along the way. The eventual, end-of-journey crash is as emotionally powerful as that initial surge, albeit sobering and dispiriting.

That eventual disappointment is often not a single moment, but a slow and steady sink  – a drawn-out death that may be imperceptible until the final throes. The Atomic Age did not end with a bang (so to speak – fortunately). The possibilities and sweeping changes nuclear power at first suggested eventually gave way to many realities and problems that could not be adequately computed and solved.

The world today is not the nuclear-powered utopia many imagined over half a century ago, spinning efficiently atop the power of the mighty atom. How could it have been? Aging nuclear power plants are being shuttered one by one, whether by decisions of cost-benefit analysis or by more harrowing circumstances caused by disasters. The recent catastrophe at Japan’s Fukushima reactor has spurred that nation to eventually dismantle their entire nuclear power program (joining other countries such as Germany). Aside from a single, initial exception nuclear weaponry has been completely absent from warfare, and the remaining stockpiles of a handful of nations reinforce the notion that these weapons only exist in the hopes of never being used.

For me, the 50’s Atomic Age represents something both gloriously forward-thinking and tragically doomed. It’s something so bombastically short-sighted that it’s nearly impossible to parody. The willingness to take this (then) newly-discovered, powerfully intrinsically force of nature and shape the fabric of our society around it is both dangerous and intoxicating. There’s a powerful theme there of looking before you leap (which is often a step in the scientific process), and the deeply unsettling notion of controlling something you barely understand. It’s arrogance to be sure – not one borne of malicious intent, but rather fueled by boundless optimism and hope that this new and awesome power is the solution to all our problems. It will power your car, lower the cost of electricity to nothing, free us from dirty fossil fuels, and sanitize our food (no, seriously).

With the nuclear family I enjoy exploring that outdated sci-fi vision of tomorrow from yesterday, pushing it only slightly past the point of reality into a darkly satirical parody. That insane juxtaposition of world-changing/destroying power being bent, shaped, shrunk, and packaged for our most banal needs is something that tickles my wry, twisted imagination. Call it “Atomicpunk” (if that term hasn’t been created and copyrighted, I’m doing that now!).

As for this particular image, I drew it digitally – unlike the others in the series – because I wanted to capture an ultra-clean, polished look to fit the 1950’s antiseptic aesthetic (say that three times fast). Likewise, the shading is less layered and simpler than what I normally do. I’m particularly proud of the lawn chair! 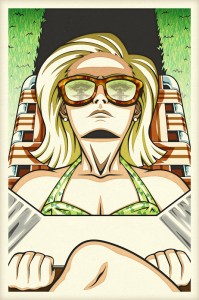 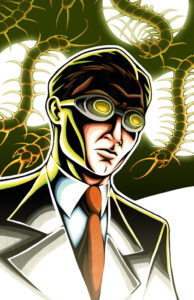 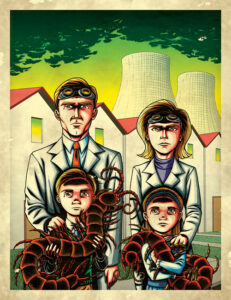