Drawings with an insane amount of detail like “Serpienta” of course require an insane amount of time (and willpower) to complete. The process of this project took place over a six week period (don’t ask how many hours).Â  It was not six weeks of solid work, but a result of having to divide my attention to multiple projects and stuff in my day-to-day life. Without interruptions or distractions, it might very well have been a solid week of work, but when do those circumstances ever occur? 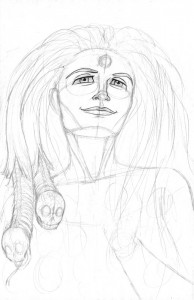 1. Initial pencil sketch. My initial concept was a medusa with sugar skull snake heads. After trying several unsuccessful composition sketches, I finally settled on one that I liked – something about the pose, perspective, and facial expression felt right. Although not originally part of my idea, I decided to have the snakes’ skin peeling back to reveal the bony vertebrae leading up to the skulls. I thought this was a cool way to push the original concept farther to an much more memorable result.

Note how proportionally larger the snake bodies and heads are compared to the final. I was just trying to work out how the concept itself would play out visually, but I knew I wanted the snakes to be smaller in order to fit more in the image. 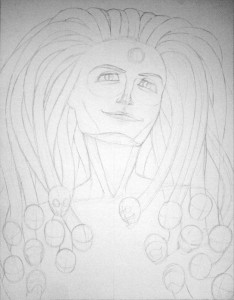 2. Full size pencil sketch. This is the pencil sketch at the project’s full intended size (24 x 30″, pretty big for a drawing). This is the most important stage; if any aspect of it is sub-par or not thoroughly ironed out, those mistakes will carry through all the way to the end. Fortunately, I was able to capture the look and feel of my initial sketch on the full size illustration board.

I got rid of her hand that had been present in my initial sketch. I wasn’t sure if I wanted to include it or not at this point, but later decided it would have been unnecessarily complex and potentially visually confusing. 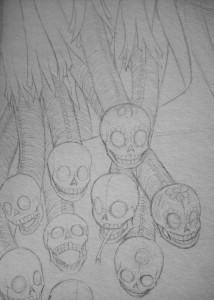 3. I started working out the shapes of the skulls. At this point I committed to the notion that I wasn’t going to do myself any favors in regards to detailing. 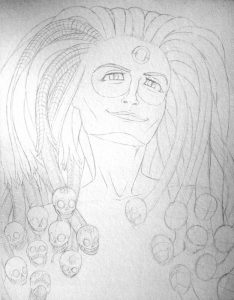 4. Doing one thing continuously can be mentally tiring for me, so I tend to skip to different areas of the drawing as I get bored. I turned my attention towards the shapes and contours of the snake bodies and their scales. Again, I was committed to leaving no detail un-detailed. I wasn’t sure how the scales would be rendered, but laying down a simple(?) grid along their surface was the first step. 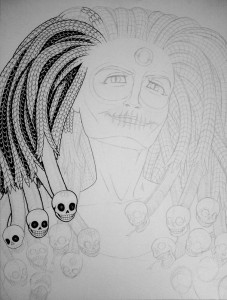 5. Inks. With all the snake bodies roughed out and grid-ed and the skulls mostly in place, I went ahead and started inking. I used various sizes of Micron pens for the outlining, and thicker Sharpies to fill in the black areas. I chose a relatively simple shape for the snake scales and repeated about 1,000 times. 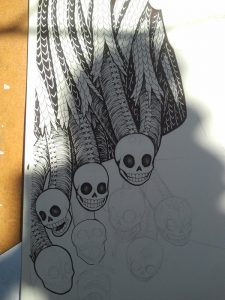 6. A detail shot of the snake bodies, bones and all. I wanted to save the sugar skull designs until the end, so I just did the outlines and basic forms first.

Normally, I do a great amount of research when it comes to animal anatomy, but since this was all a huge fantasy concept, I took the liberty of making it all up. 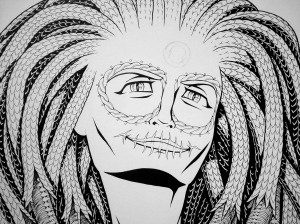 7. After getting all the snake bodies inked up, I turned my attention to her face and finalized the design around the eyes. I normally hate drawing twisting/braided structures, but I like how this turned out. 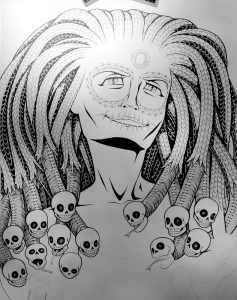 8. A full size shot, with the face 100% completed. At this point I was more than a little tired of drawing skulls, so several are left unfinished at the bottom. I also hadn’t given much attention to her body beneath the snakes.

9. Finished inks. The entire drawing has been completed and inked. After finishing up the snake heads, I finally filled in her body underneath. I went with a simple toga-type garment with no detail; I didn’t want anything there to compete with the sugar skulls. 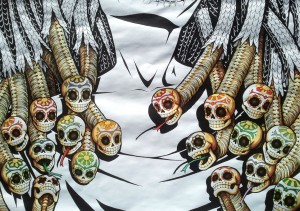 10. Beginning marker color. I started coloring in the sugar skulls, giving each one a unique color to go along with their design motif. I went with a yellow base on the bones (instead of white) simply for more visual interest and color appeal. 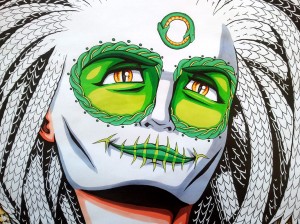 11. I moved on to coloring her skin and face. Generally, I haven’t used green as a dominant color in any of my Day of the Dead work, so I was excited to work it in here. When I was initially drawing her eyes, I wondered if making the pupils reptilian would be too off-putting and bizarre-looking. But ultimately, I’m glad I did, since it underscores the overall theme of the image and is a memorable bit of weirdness (the title of my autobiography, audio-narrated by Gary Busey).

12. With the woman and skulls all colored in, it was time to finally do the snake bodies. My decision-making process for color is often uncharacteristically spontaneous. I really had no clue how I was going to do them until it was time to do them. Since the all the snake vertebrae were the same color, I thought it would be visually boring for the bodies to all be the same color, as well.

I decided coloring each snake body in accordance with its sugar skull color made the most sense. But I was hesitant to apply such a rainbow color scheme, since I normally prefer only one or two dominant colors in a piece. But it’s something I’ve pulled off before with great success, so I didn’t sweat it much.

As the snake bodies go down to their roots, the colors gradually diminish. Though time-consuming, this was an effect I thought looked cool and gave a little extra oomf. That’s a technical term. 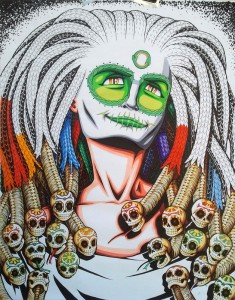 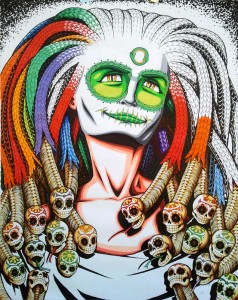 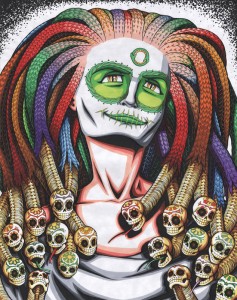 13. Finished marker colors. The multi-colored snake bodies proved to be a marathon task, but I was almost there. I filled in the white roots of the snake bodies with flesh color, to achieve the look of her flesh gradually transforming into scaly forms.

Â 14. Finished digitally-colored image. Not a whole lot was done digitally; the background color was added, the overall hue of the image was adjusted slightly, and some stone texture was added. I like to put some color into the face so it’s not bone white. This is where the mood of the image really comes into play. 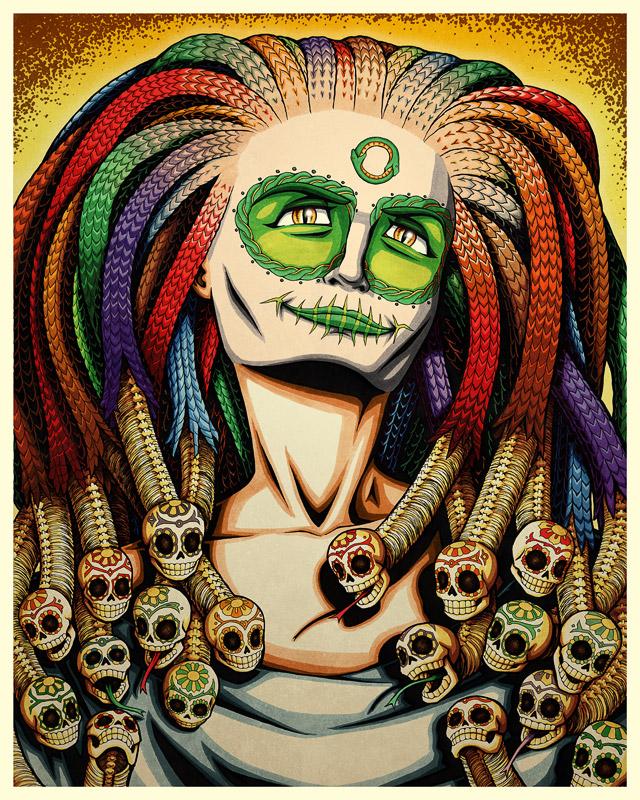